In action, the world’s finest remote-controlled cars hum with the essence of the real-life vehicle that inspire them. That’s exactly what makes the DHK Maximus 4×4 Monster Truck brought to us by Gear Best is such a damn rush: few RC trucks made today bring the thrill of recreational off-road racing and stunt driving to life quite so authentically as this 7.3-pound ball of badassery.

Trust us, the ⅛-scale DHK Maximus has no shortage of power befitting its hefty mass or constitution to sustain an epic bashing and seemingly ask, “Is that all you’ve got?” Don’t underestimate the toughness of that slick black-and-orange outer shell. The plastic is flexible enough not to crack up with heavy impact but just rigid enough to endure a pounding without losing its shape. Underneath that rough-and-ready skin, you’ll find a potent trio of a potent 2030kv brushless motor, 120 Amp brushless ESC system and a power servo built to unleash 9 kilograms of ball-busting torque. Suffice to say, this miniature monster truck might actually pack a bit too much power for brand-new drivers and is probably best handled by anywhere from intermediate hobbyists to seasoned competitive operators.

Not only is the DHK Maximus loaded with muscle, but it couldn’t have been built with more impressive attention to optimizing and efficiently managing its performance. Thanks to individual heavy duty fans bolted onto each component and a sizable heatsink, you could run the dual 3200mAh 2S LiPo batteries nonstop down to their last iotas of charge and barely feel a trace of heat rising from the motor or ESC system. Positioning the batteries in the truck’s rear opposite the ESC system, servo and motor in front superbly distribute weight displacement along the aluminum chassis, making the power and handling of the truck’s four-wheel drive all the more satisfying to put through its paces.

Speaking of handling, driving is believing when it comes to appreciating the substantial bite of those huge foam-filled rubber tires and their companion 3.5-inch wheels and threaded metal-body shocks with 3mm aluminum towers. Savvy drivers will have no shortage of appreciation for the DHK Maximus’s three customizable differentials when tweaking their fluids to perfect its handling to make the most of any driving surface.

Once you turn it loose on a wide-open course with plenty of obstacles, the DHK Maximus shines as an undisputed champion of all-terrain RC showmanship. It might seem like a superficial aesthetic choice, but those subtly angled sides are much more than a handsome visual feature. They lend the flat aluminum chassis a greatly appreciable extra degree of ground clearance that complements the exposed body posts that move and bend above the shock tower to reduce the beating taken by the truck’s suspension in a crash. Even when this rowdy vehicle doesn’t smoothly land on all fours off a jump, its front and rear anti-roll bars and expertly balanced weight dependably allow it to sort of “scramble” back into an upright position and keep rolling. The massive tires administer the kind of pit bull-like bite that allows the Maximus to harness its astounding torque and crawl effortlessly up boulders as tall as the truck itself, chew through thorny brush and ascend high, steep slopes with more ease at one-quarter throttle than quite a few RC vehicles can manage maxed out or at least without a generous running start.

You wouldn’t know it by its size, but the DHK Maximus is undoubtedly also built for some underestimated speed. The box claims it can goose up to top speeds nearing 80 km/h, and once you’ve given it room to accelerate into a jump and get past a bit of “dancing” while it settles into its groove, there’s little room to doubt such a boast. To rein that giddy-up in, the 2.4 GHz radio system’s four-channel transmitter offers “reverse” switches and trim and dual rate adjustment dials for both the steering and throttle. Again, perhaps not an ideal interface for an easily overwhelmed novice, but for a more experienced driver, there’s plenty of room for satisfying DIY optimization.

The DHK Maximus comes equipped an antenna protector, full set of wheel-assembly lugs, a beefy hex wrench, concise instructions and a charger for the vehicle’s LiPo batteries. The four AA batteries needed to power the controller are not included with the kit. Please allow at least three hours for the truck’s onboard batteries to charge. 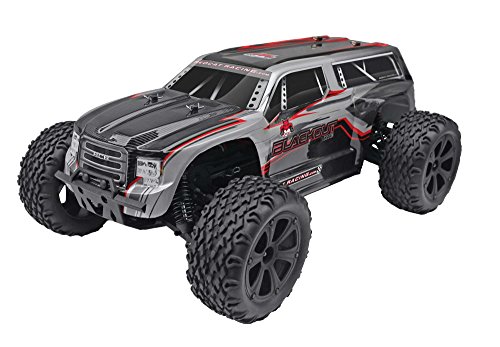 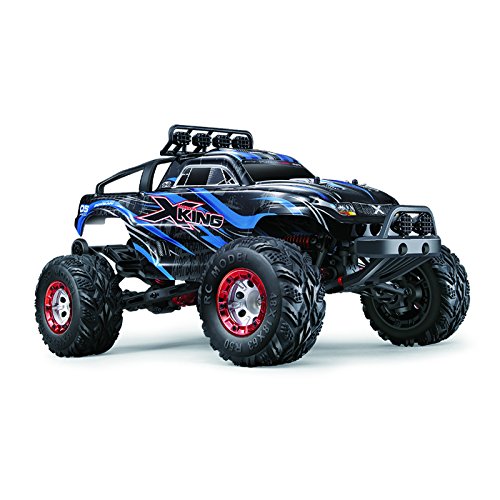 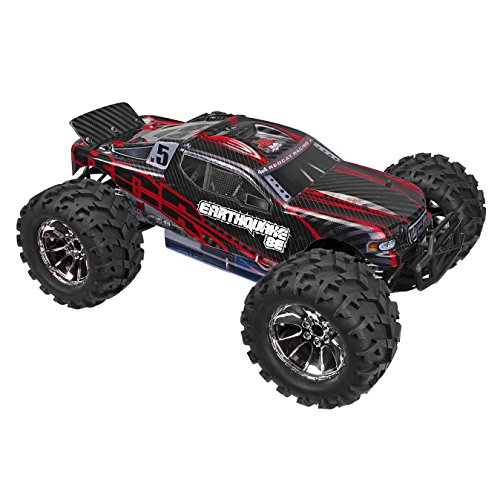